A Doorway To Home Sweet Home 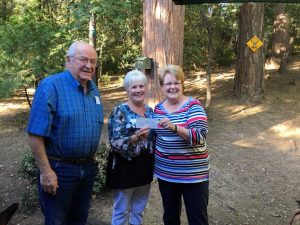 Columbia, CA — Habitat for Humanity of Tuolumne County, which builds houses for those in need, got a helping hand but not with a hammer and saw — instead cash to buy home supplies.

The Black Hat Foundation held its 26th annual Black and White Charity Ball in May at Black Oak Casino Resort Hotel that raised $30,000 for the charity. Last month foundation officials awarded the check to Habitat officials who indicated that the funds would be used to purchase doors and windows for the next four homes built at Parrotts Ferry Village in Columbia.

Habitat has already erected fourteen homes in the village since 2011. Charity officials say the plans are to construct a total of 35 safe, energy efficient and affordable homes on the property for low income Tuolumne County residents to purchase. In June, the charity broke ground on two homes to be followed by a couple more in October.

Beneficiaries of the money raised from the charity ball are selected through a competitive grant process among them have been VNA-Hospice, Special Olympics, Sonora and Summerville high school music departments, Search and Rescue, ICES, Smile Keepers, WATCH, 4-H, ATCAA, Sierra Repertory Theatre, Interfaith, and Meals on Wheels.