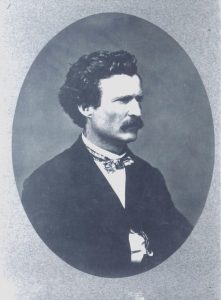 Angels Camp, CA — As the first of well over 2,000 amphibious attendees of the Calaveras County Fair and Jumping Frog Jubilee get it off to a leaping start today, one can imagine the spirit of celebrated American author and humorist Mark Twain hovering over it all, chuckling incredulously.

It is the perfect time to recall when, back in the Gold Rush days of 1865, Twain first published “The Celebrated Jumping Frog of Calaveras County,” a hilariously re-spun story that fabulously and famously ignited what would become for him a quite illustrious and remarkable career that effectively made him a “rock star” in his own time.

More locals than not can proudly recount that the yarn was inspired by a barroom tale the author heard in an Angels Camp tavern during the 88 days he spent in the Mother Lode (still still known by his given name of Samuel Clemens), where Twain scholars say he found “his voice.” In turn, some 18 years after Twain’s passing in 1910, this proud note gave rise to a local event that, every second weekend in May, continues to celebrate his literary roots — and the resilience of the rural city where, while mining for his life’s purpose Twain struck a lode that he turned into literary gold.

“In 1928, the City of Angels Camp was able to get a grant and have the streets paved…and decided to have a frog jump,” Fair CEO Laurie Giannini recounts. “In the ’30s, [the Jump] merged with the Calaveras County Fair and the two events became one — and it really is our hook and makes us unique — and really brings people to the fairgrounds.” Although no one has ever kept an official crowd count from year to year, she estimates have ranged around 35,000, well over eight times the population of Angels Camp, which 2010 census figures counted at 3,835.

One of the downtown area’s biggest draws continues to be the sidewalks themselves, inset with bronze plaques memorializing the overall winning frog jump winner each year; among these is that of the world record setting Rosie the Ribiter, that in 1986 jumped 21 feet, five and three-quarter inches.

Aspiring frog jockeys this weekend are no doubt earnestly hoping to beat that mark, surely for the boasting rights, towering trophy and custom belt buckle, if not the $5,000 cash payout that accompanies it.

As tied as Twain is to the Mother Lode, more tales and writings that involve or are inspired by the area are about to be brought to public light over 150 years after he began chronicling. In fact, a hilarious tale of two Tuolumne County miners will be among a forthcoming collection of “Mark Twain’s San Francisco Letters to the Virginia City Territorial Enterprise and other California Newspapers, 1865-1866.”

The editors of the Mark Twain Papers (MTP) at the University of California at Berkeley, The Bancroft Library describe the material as the result of some 40-plus years’ worth of scholars’ painstakingly research and reassembly of newspaper excerpts and scrapbook clippings; a kind of literary archeology.

Twain’s San Francisco 1865-1866 writings were slated for print by the University of California Press this fall but have been pushed back several months says Robert Hirst, Berkeley’s general editor of the Mark Twain Papers. He projects a publication date in fall 2018 or early 2019 at this point.

Hirst adds that work on it is going on in tandem with a re-release of “The Innocents Abroad, or The New Pilgrims’ Progress.” Among Twain’s most popular works and a travel book in and of itself, it chronicles what the author described as his “Great Pleasure Excursion” in 1867 on board the chartered vessel Quaker City through Europe and the Holy Land with a group of American travelers. Hirst says the new version will include portraits of nearly all those onboard with whom Twain engaged and spoofed with great relish.

When released, the San Francisco 1865-1866 papers will contain, at about 65,000 words, roughly a quarter of Twain’s correspondence over that time. “Our collection does now contain some stuff most scholars have not seen, let alone the general public…the contents will also go up on our website, free of charge,” Hirst effuses. The website, which is known as the Mark Twain Project Online, aims for the lofty goal of recovering and curating a fully annotated digital critical edition of everything the author ever wrote.

“The idea is that anything that he wrote [for] the Enterprise or any other local paper, which he did a few odd things when he was in San Francisco, is going to be [included] in one chronological sweep…anyone who is interested in that early period in his life is going to be interested in this,” Hirst says. Often evoking the influences of the Gillis brothers with whom Twain lived with in their tiny cabin on Jackass Hill the writings, according to Hirst, contain some of what he considers to be the author’s best.

“I always thought that the experience in Angels Camp was formulative in that way,” Hirst shares. “He heard all kinds of stories, basically away from the pressure of the city and the pressure to make up his mind what to do with himself — and absorbed an enormous amount of stuff that continues to show up in his books for the rest of his life.” Continuing, he confides, “So we are excited about this, partly because we do not think that anyone has had the chance to really follow him in great detail while he is in San Francisco — and partly because it has been a long time coming — I have been working on it ever since I first became interested in Mark Twain back in 1967!”

From the papers, Hirst issued a clip  — The Rawhide Ranch Story — humorously recollecting a harrowing bind that two Tuolumne miners got into and (spoiler alert) by a nearly miraculous intervention escaped. To read it, click here.

More On The Fair, Jump