A Hopping Great Time At The Calaveras Fair Kick Off 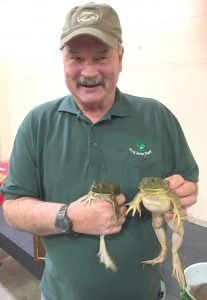 Although she did not know until Frogmeister Ron Dwelley with frog bucket in hand pulled her out of her seat, Today’s Country 93.5 KKBN morning co-host Bridgette Fanucchi gamely served to assist him in introducing the amphibian guests of honor to the packed house that turned out for the event.

Fair CEO and Manager Laurie Giannini, adding MC duties for the evening, tapped fair board members and committee chairs to introduce and honor the village of volunteers, staff and fair sponsors responsible for helping make this year’s event happen.

To view a slideshow of the festivities and some of those in attendance click into the image box. To hear Giannini give a brief preview of some of the top attractions, click here. This year’s fair runs May 18-21. More details are available by clicking here.