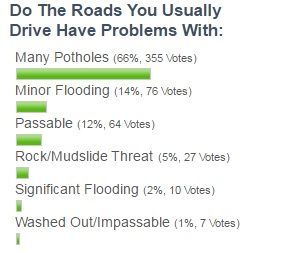 Informal MyMotherLode.com polls this week asked two flooding related questions. First the largest problem reported in the poll “Do the roads you usually drive have problems with” was Many Potholes with 66 percent of the votes. A full 14 percent noted minor flooding issues while 12 percent said the roads they usually travel are passable. Another 8 percent reported the roads they usually travel have Rock/Mudslide threat, significant flooding or are washed out/impassable. Friday’s update about flooded roads was posted here.

Also on the topic of flooding MyMotherLode asked “Is The Biblical Story of Noah’s Ark A Record of A Global Flood?” Nearly half, 48 percent voted Yes, Literally, 26 percent voted No, it’s a myth and 26 percent said it’s allegorical/symbolic. Ken Ham, a Christian apologist minister, opened a 800-acre theme park featuring a 510-foot-long re-creation of Noah’s Ark in July 2016 in northern Kentucky. Ham’s ministry, Answers in Genesis, also manages the Creation Museum nearby.

In 2014 Gallup reported a poll that found more than four in 10 Americans (42%) believe that God created humans in their present form 10,000 years ago.  Gallup reported that half of Americans believe humans evolved, but the majority (31%) say God guided the evolutionary process. However, the percentage who say God was not involved is rising from 9 percent in 1982, up to 14 percent in 2008 up to 19 percent in 2014 the most recent poll.