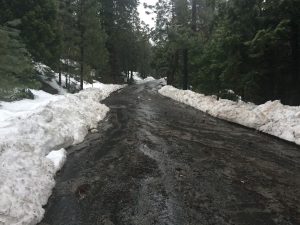 Update at 6 p.m.:  Caltrans reports that Highway 26 has been shut down between Higdon Road and the North Fork Bridge just west of West Point due to an entire section of the roadway being washed out. Motorists should expect 20 minute delays and seek an alternative route. The CHP advises motorists to detour through Mokelumne Hill. Caltrans reports there is no estimated time of repair for the roadway and it could take several weeks if the stormy weather continues.

Additionally, the county’s public works department reports that Pettinger Road in Burson is closed due to flooding from Highway 12 to Messing Road. A detour is in place on Messing Road.

Update at 4 p.m.: A whole section of Highway 26 between Higdon Road and the North Fork Bridge has fallen into the North Fork Mokelumne River. Traffic is being turned around at the bridge and Higdon Road with a detour in place through Mokelumne Hill. The CHP reports it could several weeks before it reopens.

Update at 2 p.m.: The CHP reports there is defective traffic signals at the Mono Way and Tuolumne Road intersection in East Sonora.

Update at 1:30 p.m.: In Calaveras County, the public works department reports that Pettinger Road in Burson is temporarily closed due to flooding from Highway 12 to Messing Road. They advise motorists to use  Messing Road as a detour. Additionally, a section of Highway 26 east of West Point between Higdon Road and the North Fork Bridge has been washed away in the eastbound lane.  A detour has been set up through Mokelumne Hill. There is no estimated time for reopening the roadway.

Update at 12:27pm: The CHP now reports that the issue on Highway 120 near Ferretti Road is more debris in the roadway than actual flooding. Traffic is getting through and crews are working to remove the debris.

Original story posted at 12:07pm: Groveland, CA — A couple of major roadways in south Tuolumne County are impacted by the storm system.

The CHP reports that roadway flooding is occurring across both lanes of Highway 120 near Ferretti Road. Caltrans has been requested to help assess the situation. At this time, the CHP notes there is no indication that the roadway is closed.

However, the Tuolumne County Roads Department notes that Old Priest Grade is currently closed due to a mudslide. There is not an immediate estimated reopening time.

Roadway flooding has been reported in other areas of the county as well. As you can see in the image, there was some flooding reported this morning along Old Strawberry Road in the Long Barn area.

Allow yourself extra time when traveling to your destination today.