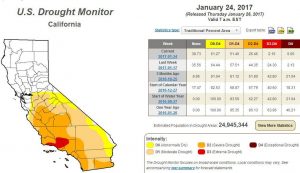 Sonora, CA — Although experts warn against hanging one’s hat on it, the latest drought monitor reading is causing some local cheers.

As of today, the US Drought Monitor map (see pictorial graph in left image box) shows that the rains from the past week diluted drought zone readings enough for all signs of “exceptional” drought (depicted by a dark burgundy color) to disappear. After nearly five years when virtually all of the state was darkly depicted, almost half the state (49.6 percent) now shows up as not being in a drought state or experiencing only “abnormally dry” conditions.

As for local impacts, it is a far cry as, for the first time in years small slivers of Tuolumne and Calaveras counties are indicated — on the monitor at least — as out of the drought. Other parts of both are listed as experiencing a moderate drought or abnormally dry state.

As reported here, regional conditions vary, such as here in the Mother Lode, where wells on fractured rock formations take much longer to recharge than those that pump from groundwater.

The deepest drought conditions, according to the monitor, exist in about two percent of the state northwest of Los Angeles, which is still colored red, indicating an “extreme” drought level.

The monitor also notes that in spite of all the rain and snow, groundwater levels are still significantly impacted. Locally, that bears out as Tuolumne County officials confirm about 100 residents with failed wells are still receiving water deliveries.