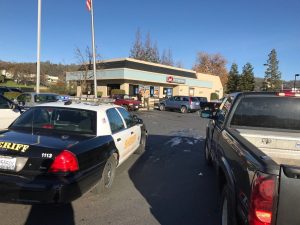 Sonora, CA — A Sonora man was arrested for allegedly causing problems in the Junction Shopping Center on consecutive days.

The Tuolumne County Sheriff’s Office reports that 41-year-old Wayne Howard Jr. allegedly used a tennis racket to hit an unknown woman, at least five times, near the former McDonald’s location. It happened on Sunday afternoon. The victim sustained minor injuries. Howard also allegedly went over and swung the racket at a nearby KFC employee, as well. Sheriff’s deputies responded, but could not locate the suspect. At this point it was unclear who the man was that carried out the alleged attacks.

The following day, Monday, Howard returned to the Junction and allegedly drove through the Jack in the Box restaurant drive-thru and swung a wooden baseball bat at the cashier. Another employee went to the front of the restaurant to write down the vehicle’s license plate number as it pulled around. When Howard reached the front he stepped out of the car and swung the bat at the employee, striking the individual in the hands, arms and hip. Deputies soon arrived on scene and ordered Howard to drop the bat. He complied with the commands and was taken into custody.

He was later identified as the suspect in the tennis racket attack from the day prior. He was booked into Tuolumne County Jail on three counts of assault with a deadly weapon. It is unclear why Howard allegedly attacked the victims.