GOP: What To Expect With The New Administration 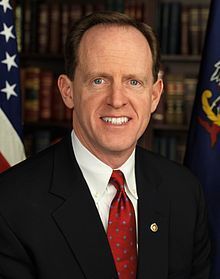 Sen. Pat Toomey (R-Pennsylvania) delivered this week’s Republican address talking about a variety of issues and how the GOP would tackle them in the new administration.

Toomey was Tuesday’s KVML “Newsmaker of the Day”. Here are his words:

“Hi. I am Pat Toomey, Senator for Pennsylvania.

Each Congress, I make it a point to visit all of Pennsylvania’s 67 counties. This fall, I was able to visit every corner of the state and speak to so many people about their concerns and their hopes.

Over and over, Pennsylvanians told me: They want safe neighborhoods and schools. They want our country to be secure and strong. They want a growing economy that creates good jobs.

Well, Pennsylvania is not alone. Hard-working men and women from the rust belt to the sun belt to the Plains, they voiced similar hopes for the future.

This has been a difficult eight years. Terror returned to our shores from Boston to San Bernardino. We’ve endured the worst economic recovery since World War II and the weakest labor participation in 40 years. The middle class has shrunk. And the cost of health care has skyrocketed under President Obama. Many Americans don’t believe their children will be better off than they were. And some younger people feel the American dream is slipping out of reach.

Well, my Senate Republican colleagues and I have worked to lessen some of these fears. We’ve enacted critical tax legislation to encourage more manufacturing and more research and development here in America. We passed legislation to repeal Obamacare and sent it to the President’s desk.

Senate Republicans worked across the aisle and passed a law to help fight the opioid epidemic while stemming the diversion of painkillers to the black market. We implemented common-sense, conservative education reforms to strengthen charter schools and shift decision making out of Washington.

And after years of short-term extensions, Republican efforts will help long-term fix America’s crumbling highways and infrastructure. And we provided essential improvements to ports, waterways, and flood control systems in nearly every state. We worked to help ensure that our veterans are always first in line for the best quality health care and that includes suicide prevention and mental health treatment.

Providing for the national defense and supporting American troops are among the Senate Republicans’ top priorities. We helped to keep America safe by supplying more of the tools service members need to take on national security challenges and help strengthen our military posture. But we aren’t stopping there.

Come January, the Congress and the new administration will work to transition Americans to a better health care system that gives families and individuals affordable choices in coverage, and takes Washington bureaucrats out of the doctor’s office.

We’ll work to reform our convoluted tax code to unburden taxpayers and free up dollars individuals and job creators can save, spend, and invest. And we’ll eliminate regulations and red tape that have slowed the economy and hampered manufacturers, the agriculture industry, and municipalities. You will see the economy unleashed.

We heard you this fall. We are going to keep working for you.

As the year comes to a close, it is a good time to remember that there is more that unites us than divides us as Americans. The blessings we enjoy are possible because of our forbearers who came here for religious freedom; our founders who imagined a nation conceived in liberty; and the military men and women who protected those ideals over the generations – and stand guard for us today.

All that we enjoy and are thankful for as Americans is not a result of luck but rather of the sacrifices of men and women of great character who founded, shaped, and defended our great country. We’ll work to safeguard their legacy and our children’s future.