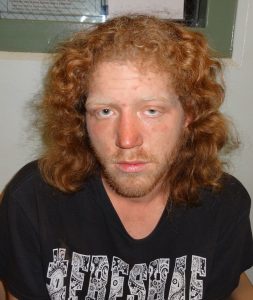 Sonora, CA — A man was caught in the act of allegedly stealing items from a shed in downtown Sonora.

The Police Department responded yesterday to a residence in the 100 block of North Green Street because a homeowner awoke to a loud sound and spotted a man running behind her residence. Two officers spotted 27-year-old Dustin Jacobson hiding nearby and identified him as the suspect. Officers also located two bags nearby containing property from the homeowners storage shed. The officers took Jacobson into custody without incident and booked him on charges of prowling and theft.