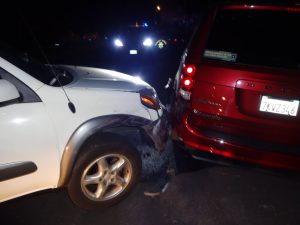 Sonora, CA — In the early hours Sunday, police say a driver who, while reaching for his cellphone hit a parked van — and wound up in jail.

Sonora Police report that Peter Kampa, 54, of Sonora, was driving a Toyota Rav 4 west on Bonanza Road in Sonora. The distraction reportedly caused him to collide with a Dodge Caravan that was sitting on the north side of the road. Responders noted that his passenger complained of pain to the right shoulder, allegedly caused by the seatbelt tightening at impact.

Police, who said that Kampa showed signs of intoxication, arrested him without incident. He was transported to the Tuolumne County Jail and booked for felony driving under the influence. Well-known in the community, Kampa, a former Tuolumne Utilities District (TUD) general manager, later moved over to work for the Lake Don Pedro Community Services District.