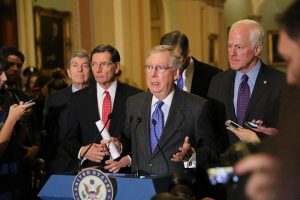 “Staring down the barrel of the economic disaster they’ve created, Washington Democrats still don’t appear to be pumping the brakes on their reckless agenda. For example, the same Democrats who spent our country into inflation are now angling to regulate our medical cures industry into fewer new cures and fewer life-saving treatments.

American researchers and manufacturers are the driving force behind cutting-edge treatments that the entire world relies on. American innovators are leading the races to cure terminal illnesses like Parkinson’s and Alzheimer’s.

The entire world benefits from our genius, but in particular, the American people get first and fastest access to the latest new treatments, cures, and medical marvels.

But the Democrats’ pursuit of prescription drug socialism could put all of it at risk.

Arbitrary, top-down government price controls would dry out the wells of American innovation to the tune of hundreds of billions of dollars in lost research and development.

And American patients would feel the pain. The cost of breakthrough cures is measured in dollars, but the cost of neglecting them would be measured in lost years of American life.

One academic analysis pegged that true cost at a cumulative 331.5 million years. Let me say that again. One expert says the negative effects of Democrats’ proposal on medical research would cost a collective total of 331.5 million cumulative years of life.

In other words, their proposal would eventually destroy as many years of Americans’ lives as there are Americans to live them.

Madam President, just two years ago, Democrats were lining up with Republicans and the rest of the country to cheer the American researchers and innovators who were driving the race for a COVID-19 vaccine… a race they finished in record time.

The American people know what it looks like when life-saving advances happen right here at home. Unfortunately, they may be about to find what happens when they don’t.”