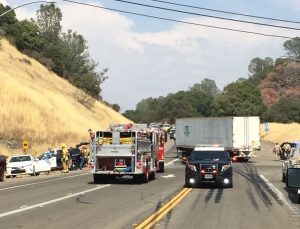 The wreck happened around 2:50 p.m. Friday at the Highway 120 intersection at the Yosemite Junction. The CHP reports Bin Zhang, 47 was driving a 2006 Toyota Camry westbound on Highway 120 and turned left on to Highway 108 in front of an eastbound 2003 Volvo big rig driven by Boris Bebikh, 59 from Sacramento. The semi hit the left side of the Camry, which spun it around and into a 2006 Camry driven by Jeffrey Linden, 55 of Copperopolis.

The two children passengers were in the back seat of Zhang’s car. The CHP identifies them as 5-year-old Angelina and 10-year-old Rebecca Jia. Angelina was trapped inside the vehicle and had to be freed by emergency personnel.  She and Rebecca were flown to U.C. Davis. Angelina sustained major injuries while Rebecca’s were moderate. A third passenger, Jifei Jia and Zhang were taken to Sonora Regional Medical Center and treated for minor injuries. All are from Hercules, California. The other individuals involved in the accident were not injured.

The wreckage blocked Highway 108 forcing the CHP to shut it down for about half an hour. Officers diverted traffic along Highway 120 and 49 for more than an hour as crews removed the wreckage and debris from the roadway.