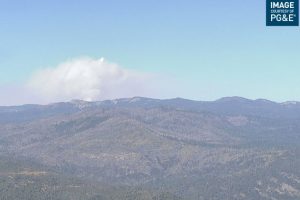 Yosemite, CA – A large plume of smoke billowing up from Yosemite National Park is one of several lightning-struck fires started by recent thunderstorms.

The fire has been named the “Red Fire.” It is burning in the Red Creek area of the park behind Half Dome. On Monday, a helicopter doing aerial runs in the park spotted the fire. Park Ranger Scott Gediman tells Clarke Broadcasting the blaze is estimated at 30 acres in size.

“Visitors are reporting seeing smoke. We’re monitoring it. We know about it. It’s not any kind of threat. We had a couple of other small starts earlier in the week, and those other starts went out. So, the Red Fire of the lightning strikes is the one that is still going and crews are on it now.”

The fire is burning at the 7,800-elevation level and is in the 2001 Hoover Fire footprint. Gediman says winds have contributed to this flare-up, which is being monitored.