Small Trash Items Pile Up During Pinecrest Cleanup Up Day 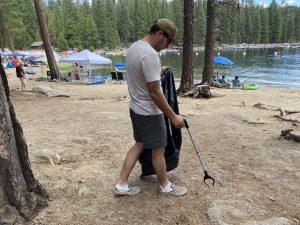 Sonora, CA – Big bundles of trash were not seen littered across the Pinecrest Lake landscape; instead, it was small items that really piled up, and now feedback from the public regarding Tuolumne County areas needing to be picked up is being solicited.

Noting that Pinecrest is a very popular summer destination loved by locals and visitors alike, Visit Tuolumne County (VTC) wants to help preserve it for generations to come. On Friday, July 29th, VTC held its first “Clean Up Day” of the year at Pinecrest Lake, with plenty of people pitching in to collect garbage. The goal was to help remove the trash left behind on the beach, paths, and picnic areas. What they found was a bit of a surprise.

“While cleaning up, we had a lot of people mention microplastics, and we realized quickly that this is a huge part of the trash we would be collecting. So many people walked by thanking us for our efforts, and we hope we inspired others to be a little more conscientious when it comes to stashing their trash,” stated Lisa Mayo, President & CEO of Visit Tuolumne County.

According to the VTC officials, the majority of the trash collected was little pieces left behind by accident. Those included corners ripped off of bags; plastic straw wrappers; twist ties; and bottle caps. They added that the latter “were most frequently found as well as cigarette butts clearly disposed of incorrectly.” And it is the accumulation of these small pieces that resulted in multiple full trash bags.

More Clean UP Days are anticipated throughout the county as part of sustainability initiatives, say VTC officials. They ask the public to inform them of any other areas where VTC could host a similar event by contacting Sarah Spoljaric at Sarah@GoTuolumne.com.