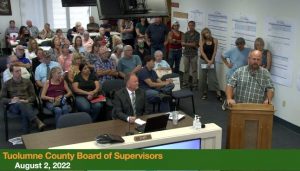 Update at 8:35 p.m.:  Although a majority of the people speaking at today’s Tuolumne County Board of Supervisors meeting were opposed to using the former Jamestown Mine site as a Pallet Shelter community, the board decided that doing nothing would be worse. Each supervisor gave their reasons for either backing the site off High School Road or not. District 5 Supervisor Jaron Brandon, whose district includes Jamestown, argued that it would be a “disservice to Jamestown” to go ahead with this site to house the pallet community. He stated, “We are leaping into a quick solution that may very well become a quagmire filled with large unforeseen costs, legal liability, challenges, and responsibilities we are not yet fully aware of.”

The other four board members expressed concerns about not taking action, with District 1 Supervisor David Goldemberg stating, “Bottom line is that we have to do something. We can’t continue to ignore this problem. [The] Government has not been dealing with this issue, and so we’re charged with difficult decisions.”

Several board members did raise concerns about the continued funding of the site. District 4 Supervisor Kathleen Haff made it clear that she was opposed to taking money from the general fund to keep the community afloat in the future. She advised that other means would have to be found. The board then voted 4 to 1, with Brandon in opposition, to approve using the Jamestown site.

The next step will be for staff to tally all the costs involved with this site and bring back a full accounting to the board at a later date. Further details on the Pallet Shelter and comments from today’s meeting attendees can be found below.

Original post at 12:54 p.m. written by BJ Hansen: Sonora, CA — Whether to designate the former Jamestown Mine site as a Pallet Shelter community is being reviewed by the Tuolumne County Board of Supervisors today.

There was a packed room during today’s board meeting for the 10:30am appointment to discuss the matter.

We reported earlier that the county is considering putting up 30 Pallet Shelters (small cabins), seven recreational trailers and a “brief-stay” tent area for those experiencing homelessness. The top choice for the site, identified by staff, is on county owned property along High School Road.

Each cabin would be 64-square feet and could house 1-2 people. The shelters can be assembled in an hour, and have a locking door, bed, shelves, a charging port, heat, and air conditioning. The cost to get the project up and running would be around $610,000.

At the beginning of the discussion, a presentation was delivered by CAO Tracie Riggs and Homeless Services Coordinator Michael Roberson. Riggs provided an explanation of the process of vetting the various potential sites. She added, ““If our community, and this board, want something in place for winter, time is of the essence.”

Roberson, meanwhile, opened by requesting civility from everyone in attendance. He explained that access to live at the site would be by referral only, and overseen by the Health and Human Services Agency. Priority would be given to women and veterans. He recommended that an outside company be brought in to oversee aspects like maintenance, cleaning and security.

The public was then invited to share input, and around 15 people voiced strong opposition. There were concerns raised about water issues at the mine site, the high heat in Jamestown, fire potential, cliffs, lack of access to shopping, young children already living in the area, creating a ‘corridor of death’ from people walking on Highway 108, and enabling homelessness.

Six people spoke in favor of the project, two of which stated they had recently been homeless, and voiced concerns about the need for shelter, and the limited amount of low-income housing in the county.

The public comment was cut off at 12:30 so that county staff can break for lunch. It was noted that a lunch break is a legal requirement in California. There was still a long line of people waiting to speak. There are other meeting items also to be addressed this afternoon when the session reconvenes during the one o’clock hour, so the discussion about the homeless Pallet Shelter site will pick up again at 4pm. Anyone will have the opportunity to speak on the topic, and then afterward the board of supervisors will give staff direction, and consensus, on how to proceed forward.