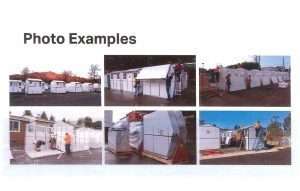 Jamestown, CA — Local leaders estimate there could be as many 800 people living unsheltered in Tuolumne County, so officials are planning to develop a Pallet Shelter community.

The Board of Supervisors will discuss on Tuesday whether to designate county-owned land in Jamestown off High School Road to be a “Safe Stay Pallet Shelter Community.”

The plan is to potentially have 30 Pallet Shelters, seven recreational trailers and a “brief-stay” tent area for those experiencing homelessness.

The structures are built and sold by the group Pallet Shelter, a public benefit corporation. Each cabin would be 64-square feet and could house 1-2 people. The shelters can be assembled in an hour, and have a locking door, bed, shelves, a charging port, heat, and air conditioning.

The project is estimated to cost around $610,000 to complete, and $385,000 has already been set aside in the fiscal year 2023 budget. The additional money would have to come from grant dollars or other county money.

Alternative sites were also considered near the Law and Justice Center off Old Wards Ferry Road and along Pulpit Rock Road.  Tuolumne County officials reviewed the locations and decided that near High School Road in Jamestown was the top choice. The reasoning given is that it is flat, paved, has water and power, is 1.9 miles from public transit and is near existing industrial and commercial activities. The panel that rated the sites included CAO Tracie Riggs, Assistant CAO Eric Erhardt, Homeless Services Coordinator Michael Roberson, Community Development Director Quincy Yaley and Chief Building Official Brian Bell.

The board of supervisors has received letters of support for the concept from Sheriff Bill Pooley and Sonora Police Chief Turu VanderWiel.

County officials argue the existing homeless camps create a risk to public safety, whether it be from garbage or fires.

The proposed Pallet Shelter community will be discussed at 10:30am at Tuesday’s board meeting.

As for the above-referenced estimate of 800 homeless people in the county, it is the number given by those on the frontlines, according to the meeting documents. It was noted that 266 homeless people were counted during a Point In Time effort conducted in January, but the data was considered incomplete. Officials note there are at least 500 in the county that receive CAL Fresh benefits who do not have a home address.