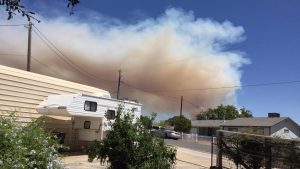 Jenny Lind, CA — The flames are out but fire officials continue to actively investigate what sparked the Pacheco Fire in the Jenny Lind area of Calaveras County.

The blaze began on July 12 around 1:15 p.m. along Lanford/Pacheco Road.   It scorched 341 acres before firefighters got a handle on the flames. As reported last Saturday, the fire was 98 percent contained and reached full containment that evening.

Cal Fire spokesperson Lindy Shoff reports that the cause is still being determined. As first reported by Clarke Broadcasting in an exclusive interview with Calaveras County Sheriff Rick DiBasilio and then confirmed by Cal Fire, marijuana cultivations and electrical problems were a common factor in four other fires, including the Appaloosa Fire near Angels Camp that burned 310 acres. A property owner was cited for negligence. Cal Fire tallied an estimated $1.5 million in suppression costs for those blazes.  Whether investigators are looking into a possible link to a pot grow for the Pacheco Fire, Shoff does not rule it out but replies, “I have not been updated on that.”