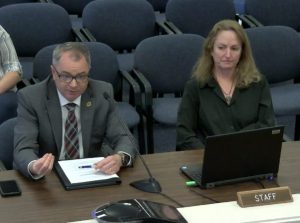 Sonora, CA — Local officials gave a presentation to the Tuolumne County Board of Supervisors today about issues related to opioid abuse.

Tuolumne County Public Health Officer, Dr. Kimberly Freeman, said Tuolumne County ranks first in the state (worst position) when it comes to the number of opioid prescriptions per capita and the number of residents taking over 90 morphine milligram equivalents per day.

While Tuolumne County has an older population, the data regarding age in the county versus other counties with high percentages of elderly show no correlation between age and prescribing, meaning that age is not a significant contributing factor.

Sheriff Bill Pooley indicated that people can become addicted to opioids in less than a week’s time. Many people who are prescribed opioids then later seek other drugs illegally, which unknown to them, are sometimes laced with things like fentanyl.

A related concern is that due to reduced staffing in his office, and the priority to cover emergency calls, he had to eliminate his Tuolumne Narcotics Team in 2020. The team was instrumental in busting a Sonora physician for wrongly prescribing drugs in 2015. If staffing increases in the future, he hopes to bring back elements of the team. He noted that his office currently has 17 vacant positions.

Sheriff Pooley stated that there have already been 13 drug-related overdose deaths in 2022, compared to 11 throughout all of last year.

Asked about what led to opioid use increases at the national level, Dr. Freeman noted that drug companies falsely portrayed opioid medications in the past as non-addictive, and patient satisfaction surveys for physicians also play a role.

Dr. Freeman has also been talking with Adventist Health about a grant application that could allow for the hiring of a Substance Abuse Navigator. There may also be a similar grant-funded position available for EMS.

You can read the full report presented by Dr. Freeman and Sheriff Pooley at today’s board meeting by clicking here.