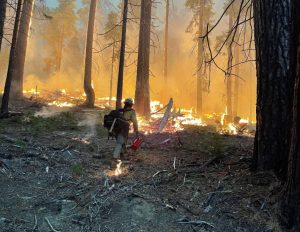 Backfiring at the Washburn Fire

Yosemite, CA — The Washburn Fire in Yosemite National Park burning in the area of the Mariposa Grove is up to 3,221 acres and it remains 22 percent contained.

It was discovered during the afternoon of July 7 near the Washburn Trail.

The Wawona Road (Highway 41) remains closed from the South Entrance to Henness Ridge Road.  Yosemite West is still accessible from the northern side of Wawona Road.   The Mariposa Grove is also closed until further notice.

Anyone visiting Yosemite should use the Highway 120 or 140 entrances.

The California Interagency Incident Management Team 13, which is overseeing the fire suppression, reports, “The fire is burning in difficult terrain which presents accessibility issues for firefighters. Heavy fuel loading from a period of high tree mortality has resulted in a large number of standing dead and fallen trees which create hazardous conditions for firefighters. The current fire location does not provide a large number of natural barriers which are often used to slow or stop the spread of a fire. Consequently, a great deal of hand and dozer line is being constructed.  Fire scars from past fires located approximately one to three miles from the current fire perimeter, which will assist firefighters in slowing the growth of the fire.  Firefighters will continue going direct when safe and will scout and prepare indirect lines.”

Click here to view a map of areas under an evacuation warning and order.