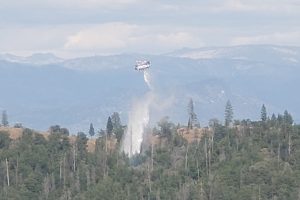 Update at 4:25 p.m.:  A new fire that ignited in the Groveland area near 2nd Garotte Road, west of Old Highway 120, has been dubbed the Garotte Fire. According to CAL Fire spokesperson Emily Kilgore, all three fires, including those in Jamestown and Chinese Camp, have been contained. They began shortly after the stormy weather blew through Tuolumne County. The Twist Fire in the 14800 block of Twist Road in Jamestown was contained to a quarter of an acre and a single tree also caught on fire. In Chinse Camp, the Shawmut Fire on Shawmut Road off Highway 49 was extinguished at a 20′ by 20′ spot. The Garrotte Fire was also contained at that size. Regarding a fire reported along Jacksonville Road, Kilgore said crews were unable to locate that blaze.

CAL Fire reports that crews are making access to the eighth of an acre vegetation fire near the 14800 block of Twist Road in Jamestown, dubbed the Twist Fire. Also, CAL Fire received several calls reporting smoke on Jacksonville Road in the Jamestown area, but there are no further details on this blaze. In Chinese Camp, near Highway 49 and Shawmut Road, titled the “Shawmut Fire.” CAL Fire spokesperson Emily Kilgore reports crews are actively working that fire, but she has no details on its size. An update will be provided as soon as new information comes into the newsroom.