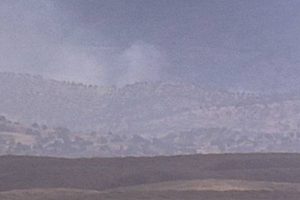 Mariposa County, CA – Ground crews remain on the scene of a vegetation fire in Mariposa County that broke out this morning near Lake McClure and was called contained by CAL Fire at this hour.

CAL Fire has named it the Bear Fire. The flames ignited in some grass on the south side of the lake off Exchequer Road around 9:30 a.m. Air and ground resources battled the blaze for about three hours, as it grew to an estimated 20 acres in size. CAL Fire relayed that aircraft were able to complete a ring retardant around the fire in the noon hour, containing it.

CAL Fire adds that no evacuations were ordered and no structures were threatened by the flames. CAL Fire details that all air tankers have been released from the scene and crews will spend the next several hours mopping up and checking for hotspots. What sparked the fire is under investigation.