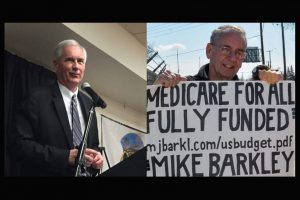 McClintock received 43-percent of the vote in the District Five Congressional race and Barkley had 36-percent. Coming in third was Fresno County Supervisor Nathan Magsig, a Republican, who ran an aggressive campaign against McClintock. He received 11-percent of the vote.

Meanwhile, eight candidates ran for the Mother Lode’s new Senate District Four seat that stretches into the Central Valley. The top-two vote-getters are Democrats, Tim Robertson with 23-percent and Mari Alvarado-Gil with 20-percent. In third, about 3,500 votes behind, is Republican George Radanovich with 17-percent, and Republicans Steven Bailey and Jeff McKay, who both have 14.9-percent. If those results hold, it will be the first time in decades that the Mother Lode will be represented by a member of the Democratic Party in the California Senate, whether it be Robertson or Alvarado-Gil.

The local Assembly race, District 8, only had one candidate, Republican Jim Patterson of Fresno, who won uncontested.