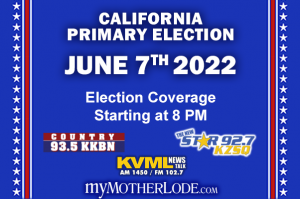 Update at 8pm: The polls closed at 8pm on this Election Day. Tune in for twice hourly election updates on AM 1450 and FM 102.7 KVML, Star 92.7 and 93.5 KKBN. The results will also be posted on the myMotherLode.com election page. Make sure to refresh the page throughout the evening.

Original story posted at 11:20am: Sonora, CA — It is Election Day, and voters are weighing in on city, county, state and federal races.

The winners of the local races will be determined during this primary election, and the state and federal races will see the top-two vote-getters moving onto a November runoff.

Tune in for twice hourly election updates after the polls close at 8pm on AM 1450 and FM 102.7 KVML, Star 92.7 and 93.5 KKBN. The results will also be on the myMotherLode.com election page.

There are four candidates running for two open Sonora City Council seats, Kurt Bryant, Suzanne Cruz, Darren Duez and Andy Merrill. The top two will serve on the council for the next four years.

In Calaveras County, there are two candidates seeking the District Three Supervisor seat of the retiring Merita Callaway, Martin Huberty and Lisa Muetteries.

The candidates for Tax Collector/Treasurer are Jennifer Barr and Lehua Mossa.

Vote centers are open in communities across California through Election Day.

In Tuolumne County, Vote Centers are open at the Tuolumne Veterans Memorial Hall and at the Main Elections Office at 2 South Green Street in downtown Sonora, the Jamestown Community Hall, Groveland Library, and the Twain Harte Bible Church. The Vote Center locations are open until 4:30pm today, and then 7am-8pm on Tuesday.

In Calaveras County, Vote Centers are open at the Government Center Elections Office, the Jenny Lind Veterans Memorial Hall, the Bret Harte High School Theater in Angels Camp and the Mokelumne Hill Town Hall. They are open until four o’clock today and 7am-8pm on Tuesday.