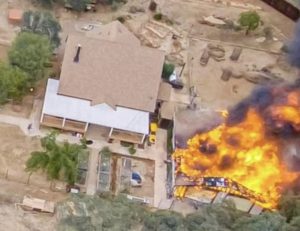 Rancho Calaveras, CA — The Calaveras Consolidated Fire Department reports that it was an “all-hands-on-deck” effort for multiple agencies to extinguish a fire in Rancho Calaveras.

It ignited on Saturday evening on Crossel Court, and other agencies that responded were CAL Fire and the San Andreas Fire Department. The blaze ignited in a detached garage and it extended to a patch of nearby vegetation. Thankfully, crews were able to stop it from spreading to a nearby residence and some hay bales. Several chickens were unfortunately lost in the fire who were in their pens.

The cause of the incident is under investigation.