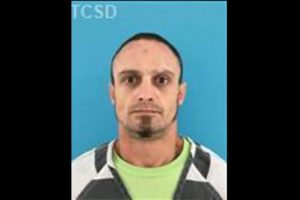 Sonora, CA – An inmate at the Dambacher Detention Center off of Wards Ferry Road in Sonora tacked on fresh felony charges for a food fight.

The incident happened last week while the inmates were in the recreation yard. Tuolumne County Sheriff’s spokesperson Ashely Boujikian detailed, “36-year-old Douglas Thomas Porter Jr. assaulted another inmate by striking him in the back of the head with an open hand and punching him in the face with a closed fist.”

Both Porter, from Tuolumne, and the victim reported the assault occurred after they argued over food. Porter faces an additional felony charge of battery with a $25,000 bond. He was arrested last month for leading deputies on a motorcycle chase in the Tuolumne area, as earlier reported here.