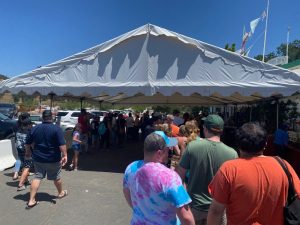 Angels Camp, CA — The community came out in force, and the Junior Livestock Auction was also a huge success, at this year’s Calaveras County Fair and Jumping Frog Jubilee.

2022 marked the first time in two years that the fair fully returned following the pandemic, and all of the traditional events were again offered. The event annually draws visitors both locally and across the greater region, and serves as a big economic revenue generator for the county.

Fair Manager and CEO Laurie Giannini reports that total attendance this year was 36,305 over the four days. She adds that Saturday and Sunday were the “biggest attendance days” since she has been CEO.

Giannini notes that the parking lots reached capacity at one point on Sunday, forcing the closure of the lots for about 45 minutes. The fairgrounds, though, did not reach capacity, so some people even parked outside, nearby, and walked into the event.

We reported in 2019, the last Calaveras Fair prior to COVID had a four-day attendance of around 20,000. That event, however, was impacted by numerous rain showers. In 2018, attendance was closer to 31,000.

Also of fun note, five-year-old Nolan Moncrief was the big winner of the International Frog Jump. His frog Old Papa had a top distance of 19 feet and ¼ inch. He walked away with the trophy and $750 cash prize.