Trail Of Cigars Leads To Burglar 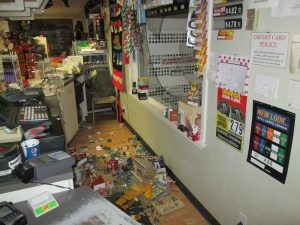 Early yesterday morning the Tuolumne County Sheriff’s Office received a call from the businesses manager about a possible burglary, as the motion alarm system detected an intruder. Deputies responded and found that a large boulder had been thrown through a window, and several tobacco items were stolen.  Surveillance video showed that the burglar was wearing a dark colored hooded jacket, dark pants, dark shoes with light colored soles, and dark colored gloves.

Items taken included Swisher Sweet cigars. That aspect of the story is significant because deputies discovered a trail of the cigars leading to a nearby residence. 20-year-old Wyatt Wilson was found in the home wearing clothing that matched the description on the surveillance video. Some of the stolen items were then located inside the residence.

Wilson was booked into Tuolumne County Jail on $50,000 bail.