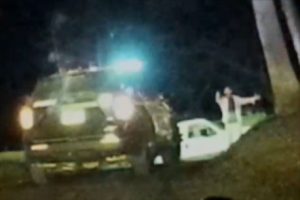 East Sonora, CA – Tuolumne County Sheriff’s officials have released an update on the deadly officer-involved shooting in East Sonora in the form of a video.

In releasing the footage, Sheriff’s officials noted that it was being done “in compliance with current law,” and they are producing audio and video footage from their “recent officer-involved shooting incident.” The shooting happened on March 12 around 7 p.m. when Fred Westmoreland driving a camouflaged pickup truck plowed into the 7/11 building in downtown Twain Harte and then led deputies on a chase to East Sonora. The pursuit ended on Edgemont Acres Road, off Mono Way, where the deadly shooting occurred, as earlier reported here.

The video includes initial footage of Westmoreland hitting the building, 911 calls, scanner traffic, dashcam of the chase, and maps of the pursuit route. It also has quotes from the deputy involved in the shooting at the end of the chase, stating, “He was surprised by two muzzle flashes,” A description of the shooting is given first and it ends with the actual footage of the shooting. It notes that the .22 caliber revolver Westmoreland pointed at the deputy and a CHP officer was loaded. Also, inside his pickup were other guns along with 250 grams of marijuana and over 114 grams of methamphetamine.