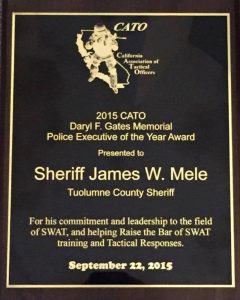 The California Association of Tactical Officers awarded Sheriff Mele the “Daryl F. Gates Memorial Police Executive of the Year Award.” The association noted that it was for the Sheriff’s commitment and leadership in the field of SWAT, and helping to raise the bar for SWAT training and tactical responses. Sheriff Mele was nominated by his team for the award and was selected from a large group of nominees. The conference was held in Los Angeles.