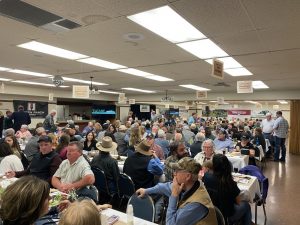 Sonora, CA — Preventing catastrophic wildfires was the main focus of the Tuolumne County Alliance for Resources and the Environment’s annual dinner and auction on Saturday evening at the Sonora Elks Lodge.

The event returned after a two-year absence that was brought on by the COVID pandemic.

Dave Daley, the chair of the California Public Lands Council, was the keynote speaker. He appeared via video and spoke about the devastation of losing 400 head of cattle in an August of 2020 fire in the Plumas National Forest. He spoke about the need for improved forest management and urged those in attendance to build bridges and find areas of compromise with those who you do not agree with.

The dinner also featured a presentation by Jeff Sargo, a local TuCare Director and business owner, about a new Community Wildfire Protection Fund. The effort is in partnership with the Sonora Area Foundation and will help create fuel breaks and carry out fire prevention projects.

The organization also gave out awards to three community leaders for their decades of work in the community. They include former county supervisor Dick Pland (click on the video box to view his comments), retiring CAL Fire Forester Adam Frese, and Ginger Armstrong who has spearheaded TuCare’s educational tours over the years. The awards were presented by TuCare President, and former county supervisor, Randy Hanvelt.