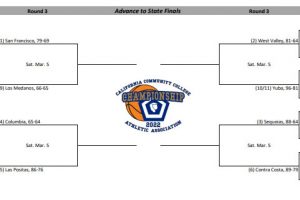 Game time is 7 p.m. at the Oak Pavilion in Columbia and can also be viewed via live stream on the college’s athletics men’s basketball webpage by clicking on the live stream link on game day or at www.YouTube.com/NorCalSportsTV. CCCAA Basketball Regional Event ticket prices are $12, $8 for youth under 12 and seniors 60+, cash only at the gate. Masks are still required inside all facilities on Columbia’s campus.

If Columbia wins tonight’s game, they will be re-seeded with the eight remaining teams in the entire state to determine which team they will compete against next. Where they will play has been determined.  After tonight all games will be at West Hills Lemoore college in Lemoore, south of Fresno.  Those games will be played from March 11-13. To view the first two rounds of playoff games, including last night’s nail-biter, click here.