One Crash Caused Another With A Fire Engine 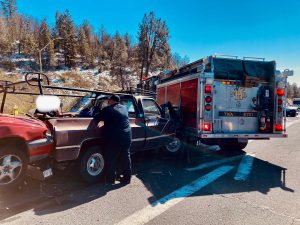 Twain Harte, CA – The CHP is releasing new information on a pickup and fire engine crash on Highway 108 near Twain Harte.

The collision happened around 1:13 p.m. last Friday (Feb. 25) near the second entrance to Twain Harte causing traffic delays. While trying to protect first responders and victims in a separate crash on Highway 108, a Twain Harte fire engine partially blocked the roadway and ended up being hit. It is standard practice according to Tuolumne County Fire Department officials.

CHP spokesperson Sgt. Adam Croxton relayed that 53-year-old Calin Smith of Pinecrest was driving his 1982 Chevrolet Silverado pickup truck towing a flatbed trailer carrying another vehicle westbound on the highway. He added that when Smith saw the fire engine, he slammed on his brakes but “due to his speed and the fact his trailer was not equipped with trailer brakes, he was unable to stop and smashed into the side of the engine.”

Smith’s passenger, Christine Smith, suffered minor injuries to both of her hands and was transported to Adventist Health, Sonora for treatment. Neither alcohol nor drugs are suspected to be factors of this crash.