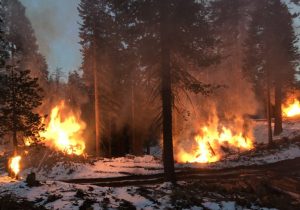 Yosemite, CA – Smoke will be visible above Yosemite National Park to gateway communities this week.

Park officials relayed that continuing pile burning will go on the rest of this week in the areas of the Mariposa Grove, Merced Grove, El Portal woodlot, and Foresta. An update on some of the jackpot burning from the past several weeks in the Crane Flat area was “very successful,” according to park fire officials. They detailed that around 340 acres were burned.

An assessment of some of the Studhorse units for burning in mid-March is being discussed by park officials, weather and conditions permitting. Those units are located southeast of the community of Wawona and north of the Wawona Road (Hwy 41), nearly two miles northwest of the Mariposa Grove. Park fire officials hope to map out the area over the next couple of weeks to share with the public showing the exact areas to be burned.