Few Flows From Above 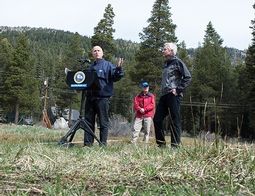 Snow that melts into the Colorado River is also lacking, according to the federal water officials, who point to a dry March with a snow pack ranging from 51 to 79% of normal in the Colorado and Wyoming valleys where the river originates. California is one of seven states supplied water by the river servicing about 40 million people and 6,300 square miles of farmland.

The feds say the water flow does not come directly from the Rocky Mountains to California and other downstream users. Instead, a series of reservoirs hold the water releasing only the legal allotment to southwestern states.

As reported earlier this week, the manual snow survey found the water content is only 5% of the historic average, which is a record low.  That prompted Governor Jerry Brown to make history by implementing the first ever mandatory 25% water reduction for the state.