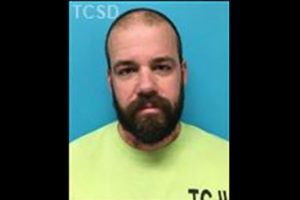 Groveland, CA – A Groveland man has been arrested for attempted murder, accused of allegedly using a frying pan and a knife to attack the victim.

What was initially called in as a domestic violence dispute on Monday, (Feb. 21) around 7:30 p.m. on Clements Road in Groveland turned into an attempted homicide after Tuolumne Sheriff’s Deputies arrived. Once on the scene, the female victim had visible injuries and told deputies that her attacker, 36-year-old Jordan Gaestel, was intoxicated. Sheriff’s spokesperson Ashley Boujikian details, “She told our deputies that during an argument Gaestel flipped out and punched her, held a knife to her throat, dragged her by her hair, struck her with a frying pan,  and then choked her unconscious.” Boujikian continued, “She was able to push him off of her and escape and went to a neighboring resident where she called for help.”

During the assault, Gaestel also allegedly told the victim “she could not leave and threatened to kill her at different times throughout the incident, causing her to fear for her life.” relayed Boujikian.

Gaestel was hiding in an apartment on the property. Deputies outside ordered him to come out of several times, and when he did not comply deputies went inside. At that point, he came downstairs and gave himself up. Boujikian says the knife he used in the attack was found on him. He faces charges of attempted murder, criminal threats, assault with a deadly weapon, false imprisonment, kidnapping, and infliction of violence on a domestic partner.

Sheriff’s officials urge anyone facing domestic violence or suspecting it to get help. Boujikian added, “Domestic violence can be one of the most serious crimes we deal with in our community. Although our deputies primarily deal with physical abuse, other types of abuse are common and can be addressed through the help of family, community organizations and other social support.”

The Center for a Non-Violent Community’s 24-hour support line at 209-533-3401is a good source, according to sheriff’s officials, that offers support safety planning and other resources.