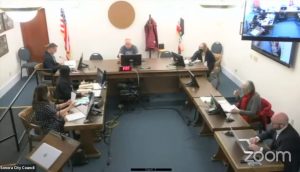 Sonora, CA — After spending nearly three hours talking about whether to keep the city of Sonora’s Social Equity Committee, the council decided to postpone a vote until the next meeting.

Councilmember Colette Such, a proponent of the committee, opened up the conversation at last night’s meeting by stating she was “perplexed” by opposition to the work of the group. Adding, “I don’t know how anyone could be opposed to such a worthy goal, racial justice, but I know it hasn’t always been easy.”

The city-appointed committee has been meeting twice monthly for about a year and a half following the local and national Black Lives Matter protests.

Such argued that it is difficult and time-consuming for people of different backgrounds to come together and draft a resolution related to social equity. She stated it is, “not work for the weak spined.”

Councilmember Mark Plummer countered, “I don’t think anyone questions the noble intentions, but it has become a completely partisan effort and not good for the city.”

Plummer said the city should refocus its attention on other pressing issues. Adding, “It has been a distraction for a year and a half that has caused un-needed animosity, made us weaker, and less cohesive.”

Plummer also pointed out Councilmember Jim Garaventa recently stepped down from the committee and in his resignation letter indicated there were better ways to address this issue (racial inequity) other than the committee.

Councilmember Ann Segerstrom then stated that she “completely disagrees” that it is a partisan effort. She read aloud the Preamble to the Constitution and argued that everyone in the community has a right to impartiality and fairness.

Councilmember Garaventa, who was the only member participating outside the chambers via Zoom, then said he would share his opinions after the public comment period. Mayor Matt Hawkins followed suit.

Over a dozen people spoke during the public comment period, either in person, or via Zoom. It was mostly balanced when it came to people for and against. Arguments against the committee were that it creates more division, is a misuse of public resources, unnecessary, and inappropriate. Others in support of the committee shared stories about not feeling welcome in Tuolumne County because of race or cultural background. Some also stated the committee shouldn’t just focus on race, but also sexual orientation, and people facing homelessness.

When public comment concluded, at 8:20pm, Mayor Hawkins noted that councilmember Garaventa had unexpectedly dropped off the Zoom call, and he indicated it was likely due to technical difficulties. Hawkins stated the issue was too important to vote on without a full council, so it was tabled to a future meeting. The public comment period will remain concluded when the council picks up the conversation ahead of a future vote.