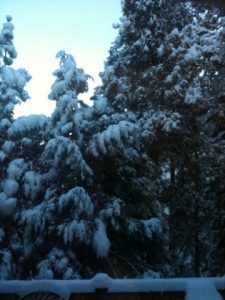 A cold weather system will bring moderate to heavy snow to the Sierra Nevada tonight through Wednesday leading to significant travel impacts across the passes and low snow levels.

And a Winter Storm Warning has been issued for the western slopes of the northern Sierra Nevada, from 4 PM this afternoon until 10 PM Tuesday.

One to eight inches of total snow accumulation is expected above the 2,000 foot elevation. Four inches to two feet of snow is likely above 3,500 feet.

Lowering snow levels on Tuesday may bring some snow accumulation below 2,000 feet.

Early season campers and hikers should be prepared for a return to winter conditions.

Additionally, a Freeze Watch has been issued for the Mother Lode and the Northern San Joaquin Valley from late Tuesday night through Friday morning.

Widespread areas of sub-freezing temperatures are expected in the overnight and early morning hours.

Thursday morning will see the coldest temperatures, when lows drop into the mid twenties in the coldest areas, with durations of six to eight hours below freezing.

Frost and freeze conditions could kill crops, and other sensitive vegetation. Make sure pets have shelter from the cold.

Take steps now to protect tender plants from the cold.

A Winter Weather Advisory means periods of snow will cause primarily travel difficulties. Be prepared for snow covered roads, chain requirements and limited visibilities. Slow down and use caution while driving. Allow more time for travel.

A Winter Storm Warning means there will be snow covered roads and limited visibilities. Travel is not recommended while the Warning is in effect. If you must travel, keep an extra flashlight, food and water in your vehicle in case of an emergency. Be sure to carry chains/cables inside vehicle.