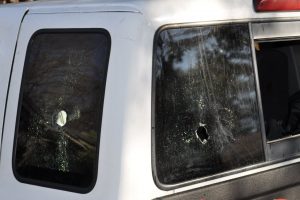 Residents were inside the targeted home, but fortunately, a pickup parked in front of it blocked the bullets from hitting the house, according to sheriff’s officials. They noted that another vehicle at a nearby neighbor’s home was also struck, shielding that house from bullets as well and preventing possible deadly injuries.

The shooting happened around 6 a.m. on Sunday in the Eldel Road area of Pine Grove. Callers reported hearing multiple gunshots followed by the sound of a vehicle speeding away to dispatch. Once on scene, deputies questioned the occupants of witnesses at the targeted home, pointing them to possible suspects and their vehicle.

A bulletin on the shooting was released to neighboring counties’ law enforcement agencies with the San Joaquin County Sheriff’s office responding the vehicle had been found and two suspects, 30-year-old Jason Mario Leonardini of Lathrop and 33-year-old James Lazetera of Stockton, had been arrested.

The vehicle was searched turning up two firearms, one in the glove compartment, as pictured in image box photos. Also, uncovered was additional evidence linking the suspects to the shooting. No further details were released regarding that evidence.