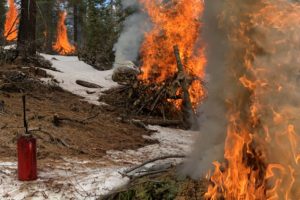 This week piles in the Merced Grove as well as jackpot burning around Crane Flat along the Big Oak Flat Road are being ignited. Park fire officials detail, “Jackpot burning targets high concentrations of naturally occurring downed debris. This process is in preparation for broadcast burning a larger area at a later time.” Broadcast burning involves areas with little or no forest canopy present like on grasslands, shrublands, and oak woodlands.

The yearly pile burning began in January, setting ablaze 60 piles around Hetch Hetchy and the Mariposa Grove of Giant Sequoias. Another 84 piles were burned on Garnett Ridge Road in the Crane Flat area and Wawona. Burning on Garnett Ridge was stopped due to snow, but is expected to start up again as soon as the snow melts. That brings the total piles burned to date to 144.

During this latest burning operation, smoke may be visible and could linger into the following weeks as large logs smolder.