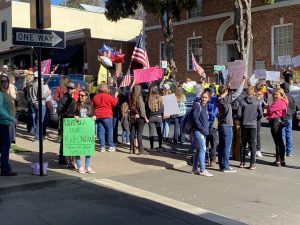 Sonora, CA — Around 200 community members, many of whom were students, were holding signs at Courthouse Park in Sonora this morning in opposition to masks being required in school classrooms.

The protestors were enthusiastic and many of the passing vehicles honked in support. The event never appeared that it was going to get out of control, but at one point, shortly before 10am, officers motioned for the protestors to all back up onto the sidewalks because they were starting to impact traffic in the downtown area.

Advertisements for the protest were circulating on social media this past week after Governor Gavin Newsom decided to end the mask mandate in public spaces starting on Wednesday, but not for schools. We reported yesterday that the state announced that the classroom decision will be reassessed around February 28.

The signs read things like “let me breathe,” “tyranny,” “masks suck,” “give us our freedom back, and “stop the insanity.”

There were also booths set up related to things like masking, and more specifically the masking of students.

Click in the video and image boxes to view some of the scenes from this morning.

Reporters Nic Peterson and Mark Truppner contributed to this report from the scene.