Out Of State Fugitive Wanted For Attempted Murder Arrested 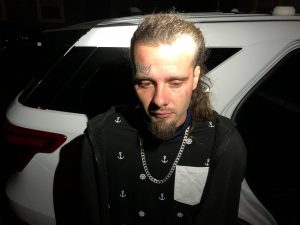 Ione, CA – A South Carolina fugitive wanted for attempted homicide ended up being caught at an Amador County home, armed with a gun.

Just before 8 p.m. Friday (Feb. 11) a caller reported a man in his living room armed with a handgun. Deputies raced to the residence in the 5500 block of Park Circle in the Ione area. Once there, they determined that all inside had run from the home except the suspect and the elderly homeowner.

Just as deputies were surrounding the house in hopes of rescuing the homeowner, the suspect came out of the house onto the front porch and he was arrested without incident. The suspect has been identified as Austin McDonald of South Carolina, who had a warrant for his arrest for attempted murder in that state. No further details were released regarding that alleged crime. Also, it is unclear if McDonald had a relationship with someone in the house or randomly chose to enter the home.

McDonald’s can now tag on charges of a felon in possession of a firearm, criminal threats, intimidating a victim to deter from reporting a crime, brandishing a firearm, and attempting to conceal evidence along with the attempted homicide warrant. He is being held without bail due to the murder warrant.