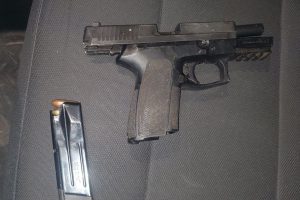 Pioneer, CA – An Amador Sheriff’s Deputy pulled over a vehicle in Pioneer and found a loaded handgun in it.

While patrolling in the area of Pioneer Creek Road recently, a deputy noticed a passing Chevrolet Silverado with registration tags that expired over two years. The deputy followed the pickup and with lights flashing conducted a traffic stop near Schaefer Ranch Road.

During a search of the truck, a loaded Sig Sauer handgun, as pictured in the image box after deputies had pulled out the round in the chamber and magazine, was discovered Further investigation proved that the gun had been stolen. Additionally, uncovered in the pickup were suspected methamphetamine and hypodermic needles.

The driver, 49-year-old John Westfall III, was arrested without incident for various firearm and drug-related charges.