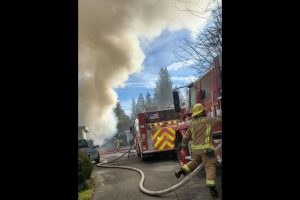 Update at 4:15 p.m.:  CAL Fire reports that crews have knocked down a single-wide mobile home fire at the Sonora Estates Mobile Home Park in the 22400 block of South Airport Road in the Columbia area of Tuolumne County where other residents were threatened. There were reports of continued bangs or small explosions heard going off due to ammunition in the mobile home. Residents were able to escape the flames and the Red Cross has been called in to assist them, as the trailer is a total loss. What ignited the blaze remains under investigation.

A special thank you to our community partners Lorraine Lewis and Ashley Diehr for sending in a video and a picture respectively.

CAL Fire reports that when crews arrived the single-wide trailer was fully engulfed in flames at the Sonora Estates Mobile Home Park in the 22400 block of South Airport Road. Additionally, continued bangs or small explosions were reportedly heard going off due to ammunition in the mobile home. Other residences are threatened at this time. An update will be provided as soon as new information comes into the newsroom.