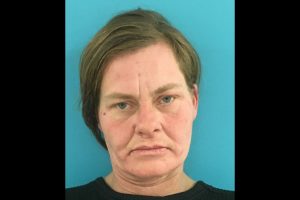 Sonora, CA – When the alleged thief could not break into a Sonora store via the side door, she went around and used the front door, according to police.

A report of a burglary at a retailer on Sanguinetti Road brought police to the Crossroads Shopping center last week just after 5 a.m.  While the store did not open until an hour later, police found a store clerk was ushering 41-year-old transient Sophia Tate from the business as they arrived.

Tate was immediately recognized, as just several hours prior she was found with stolen property and arrested.  Tate was once again taken into custody and this time she had items taken from the store on her.

During further investigation, it was learned that Tate had tried to break into a side door at the retailer, but that attempt was foiled by an employee.  Not deterred, police relay that Tate then walked around to the front door and broke into the store.

Facing a possible felony charge of burglary and a misdemeanor charge of trespassing, Tate was placed on a $20,000 bail. She remains in jail.