Keely Cashman Talks About Olympics And Growing Up In Tuolumne County 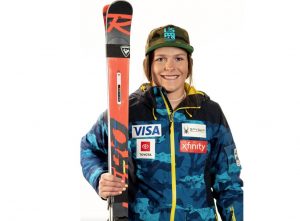 Strawberry, CA — Sonora-born, and Strawberry native, Keely Cashman will be heading to China next week to participate in the Winter Olympics.

She’s in Europe right now competing on the World Cup Circuit. After a couple of final events over the next few days, she will be leaving for China on Wednesday.

Clarke Broadcasting caught up with her via telephone, and she is featured as today’s KVML “Newsmaker of the Day.”

Cashman started skiing at Dodge Ridge early in her youth and racing when she was only five years old. Asked if she’s always had Olympic ambitions, she says, “That’s pretty much always been my goal. I went to Pinecrest School and I remember they would ask us what we’d like to do when we grow up, and mine was always professional skier, or Olympian.”

Strawberry remains her hometown but she has also spent extended amounts of time in Bear Valley and Lake Tahoe over the years.

Adding, “I made the national team when I was 16 so I’ve been competing in the US, Canada and Europe since then.”

The year leading up to the Olympics was the most difficult of her skiing career.

She explains, “I actually got injured last January (training in Germany) and had a traumatic brain injury and a bunch of other things, so I missed most of last season doing rehab. It was really challenging and a huge struggle. I had never been injured before, so it was tough. But I think it has made me a lot stronger, so I am actually thankful for that. There are a lot of ups and downs in ski racing. It is a tough sport.”

At the Olympics Cashman says she will be competing in the Super G competition on February 11, the downhill on the 15th and the combined on the 17.

She concluded by saying, “Thanks to everyone back home. I couldn’t be where I am without you guys and your support means a lot to me.”

Keely is the daughter of former U16 National Training Group coach John Cashman and Christy Cashman.

The interview will air throughout the morning.