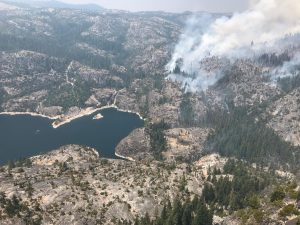 Sonora, CA — An item that the Tuolumne County Board of Supervisors discussed for multiple hours on Tuesday was whether to take a firm stance about the policies and strategies of the US Forest Service in fighting fires.

During the peak of the summer fire season last year the US Forest Service temporarily changed its firefighting strategy so that immediate suppression tactics were always used.

Board Chair of the Supervisors, Anaiah Kirk, proposed passing a county resolution asking the Forest Service to make it permanent and end what some have referred to as a “let it burn” policy during the declared summer fire season. He asked that the county pass a resolution, and also send a separate correspondence to the National Association of Counties (NACO) this week so that the national organization will consider a policy discussion on the matter. Kirk also had a volunteer consultant address the board.

Click here to view Supervisor Kirk’s full originally proposed resolution. Kirk said he believes there will be federal legislation proposed on this issue in the coming months, possibly from Congressman Tom McClintock, and feels it is important to weigh in at the county level.

It was first discussed during the morning portion of Tuesday’s board meeting. Some supervisors offered some support, but also noted it is a complex issue, and not wanting to strain current positive relationships with the US Forest Service. There were also questions raised about whether putting out fires too quickly can lead to more vegetation buildup.

During the public comment period, a half dozen people spoke in favor of approving it, including business leaders like Melinda Fleming of TuCare, Justin Myers with the Tuolumne County Business Council and Stacey Dodge of Sierra Resource Management, among others. The Donnell Fire in the Stanislaus National Forest in 2017 was referenced, along with the Caldor and Tamarack fires that burned throughout Sierra Nevada counties last year.

One person spoke in opposition arguing that more voices on the issue should be present to weigh in so that there is a balanced conversation.

Some board members then indicated they could support the concept if the wording was framed differently.

Action was postponed until later in the afternoon. At that time, Stanislaus National Forest Supervisor Jason Kuiken was invited to speak. He did not agree with the assumption that the forest often uses a “let it burn” policy. He said the “default” is to suppress all fires and estimated that 96-98 percent are managed by initial attack. He indicated that sometimes the conditions do not allow for it, and those are the ones that end up in the news cycle coverage. He added that proactive forest management is at the forefront right now, and over the next few years improvements will be seen with things like the massive SERAL project, a joint forest improvement project that includes partnerships with various agencies.

In the end, supervisors David Goldemberg and Kathleen Haff were in favor of approving some semblance of Kirk’s proposal that could be sent to NACO. Supervisor Haff noted that there is a public perception that the Forest Service just lets the forest burn, which she says is “not reality,” but feels the letter could be a conversation starter for NACO.

In the end, the three (including Kirk) agreed on writing, “During the rulemaking process, we request the US forest service to immediately suppress all fires on federal lands, excluding prescribed fires, until such a time that a balanced approach can be attained as part of the rulemaking process.“

Supervisors Ryan Campbell and Jaron Brandon remained in opposition. Among the concerns they raised were that the proposal was being “rushed” and had not been vetted by county staff. It is something that Supervisor Kirk brought forward himself. They both indicated there were aspects of Kirk’s proposed resolution, however, they could agree on.

A revised letter to NACO, detailing the county’s position, will state, “During the rulemaking process, we request the US forest service to immediately suppress all fires on federal lands, excluding prescribed fires, until such a time that a balanced approach can be attained as part of the rulemaking process.“

You can read the final resolution being sent to NACO by clicking here.