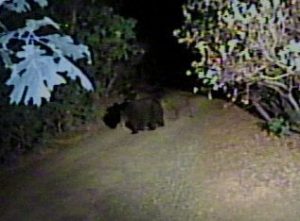 Now, a Twain Harte man says he came face to face with a mountain lion with only a pane of glass and a few feet between them. The sighting happened a week ago. David Baxter lives about a quarter mile north of downtown Twain Harte. He says that last Saturday he was looking out a back window in his home at a doe with her fawn grazing. Baxter went outside, took a picture of the two deer, and then went back inside and the deer suddenly took off.

“And then I turned around and I was staring at the mountain lion,” says Baxter, “It was pretty intense. I was glad the glass was between us. It was kind of like a staring or standoff contest. Then it just turned and went off up over the ridge and disappeared.”

Then next day Baxter saw the fawn again, but not with its mother. As you can see in the picture to the left, the fawn has injuries to its left side and hind leg.

On Friday, another Twain Harte resident, Jacob Foiada, got a late night visitor on his property in Mount Elizabeth. A bear was captured on his security camera. The pictures are to the left. Stanislaus National Forest Spokesperson Rebecca Garcia recommends homeowners keep trash picked up and use wildlife proof containers.

“Also, bears like bird feeders so if you have them, make sure you put them up high,” says Garcia.

Having a whistle handy and making lots of noise can help to scare off wild animals according to Garcia, but she says knowing bear behavior can save your life.

“If a bear is nervous or upset, it will put its ears back like a cat,” explains Garcia, “If they are going to charge they will do a moaning and a throat pulsing sound.”  If one does attack, the last thing you should do is play dead, instead, Garcia says always fight back.

If you are wondering, how the fawn is doing? Baxter reports he saw it just this morning with several other deer at its side.