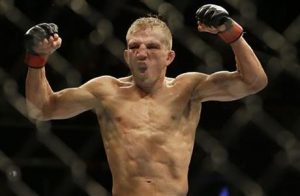 Sacramento, CA — After some uncertainty regarding who he would fight, Angels Camp native T.J. Dillashaw defended his UFC bantamweight title.

Renan Barao, who Dillashaw upset last May, was a late scratch due to an injury on Friday. Barao collapsed and hit his head while trying to cut weight. Joe Soto was the late fill-in, and Dillashaw defeated him Saturday night with a fifth round TKO.

UFC 177 was held at the Sleep Train Arena in Sacramento. During the post-fight interview in the Octagon, Dillashaw indicated there was initially a question about whether the fight would happen.

“It was a tough call, but I obviously I wanted to do it for Sacramento,” said Dillashaw. “There’s no way I’m not going to put a show on for you guys and save the night. Thank you so much for coming out. Angels Camp, thanks again.”

Dillashaw was well ahead of Soto on all three of the judge’s scorecards when the fight was stopped at the 2:20 mark.

UFC officials noted that Renan Barao would now need to work his way back up, and fight someone else, before a potential re-match with Dillashaw. It is unclear who Dillashaw will fight in his next title defense.