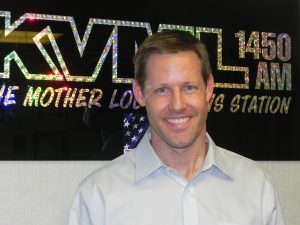 Sonora, CA – A candidate for Congress was in Sonora today to hear from voters.   Art Moore hit the streets of downtown Sonora this afternoon.  He also fielded questions at the Tuolumne County Democratic Club meeting at the Pine Tree Restaurant on Hess Avenue in East Sonora this evening.

Moore is challenging Congressman Tom McClintock for the District 4 seat. He has harsh criticism of this opponent. Moore says, “I live in the district and grew up in the district, unlike my opponent, so I know the district needs.”

Moore is a Republican running against Republican incumbent McClintock. So why run?

“I would much rather be running against a Democrat, but I’m passionate about this area. I’m running because I don’t think the current Congressman is doing the job, and I’m giving voters an alternative this cycle that they haven’t had in prior years,” said Moore.

Moore graduated from the U.S. Military Academy at West Point and has 14 years of combined active duty and National Guard Service. He also spent eight years as a business executive. McClintock has 22 years of experience in the State Legislature, and was elected to the U.S. Congress in 2008. Moore calls McClintock a career politician and disagrees with his handling of forest management issues.

He says, “McClintock has been antagonizing environmentalists and federal land managers his whole career. New blood is needed if we are going to move projects forward in the right direction.  We need someone who is going to respect all the stake holders and see the value in each argument to get some win-win solutions on this topic.”

Moore claims he would fight for federal dollars and work across party lines. He adds, “McClintock has been shown to be absolutely against federal spending in any form. The tax dollars we send to Washington D.C. every year is significant. This district should have a Congressman that’s willing to put our projects up against other states.  We should be getting assistance for things like our drought situation, our roads and infrastructure, and the management of our forests.”

It has been a contentious race to this point. In the past June primary race, McClintock criticized Moore for never voting in an election and questioned whether Moore was a “credible candidate.”

The election is coming up November 4th.