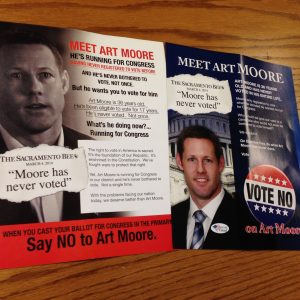 Sonora, CA — Congressional candidate Art Moore’s campaign is striking back against attacks made over his lack of voting in past elections.

Congressman Tom McClintock has made Moore’s voting record an issue in the June 3rd primary election. It is unique race in that McClintock and Moore are both Republicans. McClintock campaign mailers have been sent throughout the district noting that Moore is 36 years old and has never voted in an election.

McClintock was in Sonora yesterday, and during an interview, he said, “Frankly, the Republican challenger, I don’t view as a particularly credible candidate. He’s never voted in his life. I think that when people discover that, it’s all over. I’ve got much more concern about the Independent candidate, who is credible.”

The third candidate in the race is Jeffrey Gerlach, who declines to state a political party.

The campaign for Moore has put out a statement claiming that Moore purposefully chose to follow the path of “Patton, Eisenhower and Marshall,” and declined to participate in civilian politics while a full time military officer. Moore’s campaign pointed out that it is angered that McClintock’s mailer says, “We’ve fought wars to protect that right (voting).”

“For Tom McClintock, who has never even sniffed an infantry boot, to criticize the manner in which Art Moore has served his country is deeply offensive,” said Moore’s campaign advisor Rob Stutzman. “McClintock’s idea of service is to collect a pension from California taxpayers, and then double dip by getting a Congressional salary at the same time.”

The primary election is now less than three weeks away.